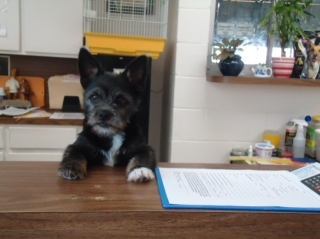 February 2012, SVH was recognized by the Texas Veterinary Medical Association as a Heritage Clinic. This is in recognition of an excess of 50 years of continuous service to a practice area.

The Sweetwater Veterinary Hospital was started by Dr. Bud E Alldredge Sr. in 1946 after graduating from Texas A&M. (His last year of school was interrupted by WWII). The practice was “outcalls” for large animals and small surgeries were done in the basement of our home on Pine street. The original clinic was built in 1947 by “Red” Alston on the corner of E. Broadway and Hiawatha street. The present clinic building was occupied in August 1979 and is located next to the old building at 2303 E. Broadway. The new building included inside the treatment and handling facilities for horses, cattle, and other “exotic” animals.

Dr. Bud E. Alldredge Jr. joined his father in the practice in August 1969 after graduating from Texas A&M College of Veterinary Medicine. Dr. Bud Jr. had also done undergrad studies at the University of Texas. The combination of the two universities is unusual but at least results in a “well-rounded” education.

It should also be noted that Dr. Bud E Alldredge III is also a veterinarian and has a practice in Cleveland, Texas.

Have a Question? Need to book an appointment?

Connect with us and one of our team members will be happy to assist you.